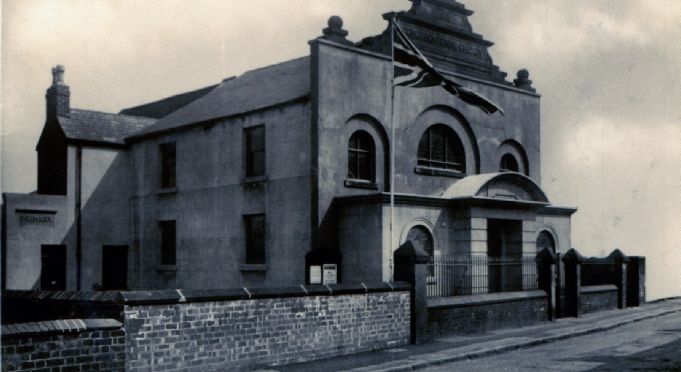 February 2004 saw the opening of a new United Reformed Church on Chapel Street, Marlpool. With this still comparatively recent, now may be an opportune moment to look back at the history of this chapel, one of the oldest in the Heanor area.

At the end of the 18th century, non-conformist groups were already meeting in the area, at private houses both at Tagg Hill and at Mill Hay.

Around 1800, the Rev. Joshua Shaw, of the Independent Chapel at Ilkeston, brought these two groups together, and they met at the premises of Benjamin Hardy, a town-centre draper. The group outgrew its meeting place and decided to build a chapel in the area, eventually buying the land on what is now Chapel Street in 1820.

It took two years for the meeting house to be completed, and the new building was used both for services and as a Sunday School. A Minister, Charles Ellis of Belper, was appointed 1825.

By 1827, the meeting house was itself too small, and a chapel was built on the same site, being named the Mount Zion Independent Chapel at Marlpool.

In the 1840s the chapel was extended to have a gallery installed by the then Minister, Edward Leighton. At this time the Sunday School had over 300 pupils and 33 teachers! Rev. Leighton also instigated the first choir, having decided that those who possessed either "actual or imagined" vocal powers should be trained to sing. Such a success was this choir that they were given two rows of seats immediately behind the pulpit, and space was also provided for the band, consisting of 6 or 7 instruments.

In 1856, at the end of the Crimean War, Rev Leighton led the Marlpool contingent in a Day of Thanksgiving in Heanor, with a procession of some 450 members going from the Marlpool Church to Heanor.

In 1878, the chapel was fitted with gas lighting, the height of luxury at the time! This was followed by a fund-raising campaign for a new heating system. The next project, began in 1889, was to raise funds for a pipe-organ, though this took until 1896 - the funds were used instead for feeding local children during the Great Coal Strike of 1893. This was a recurring theme, and the coal strikes of the 1920s again saw the Chapel feeding over 300 children a day. Improvements to the building continued, with, for example, electric lighting being added in 1928.

But, all good things must come to an end, and in 2002, it was decided that the building was beyond economic repair, and that a new chapel was required.

Langley used to have its own "Castle." Well, in the late 1800s, a man named Newton started enlarging a cottage, a folly which became known as Langley Castle (picture below, c.1900), on Hands Road. Regarded by many as an eye-sore, it was never finished, and stood empty for half a century before being demolished. In November 1956, Peter Wright, then a farmworker at the Co-op Farm at Laceyfields, Langley, discovered a polished neolithic stone axe while gathering stones in a newly ploughed field, near to the main railway line. It is now in the possession of the Derby Museum. (Peter is now one of the Committee Members of the Society.)

Analysis of axe shows it to be coarse epidotized quartz felspar tuff, most likely originating from the Lake District. There wre four principal regions in the country where the stone to make axeheads originated, and this is one of them.

So, neolithic man was probably in our area some three or four thousand years ago. There have been very few other prehistoric finds in the area - a few flint implements were found in 1910 south of Langley Mill church, and a small pierced whetstone has been found in a garden on Hands Road. But future finds may still add to the history of the region.

Langley Swimming Baths, which were situated at the junction of Laceyfields Road and Aldreds Lane, were developed from one of the early  reservoirs which supplied Heanor with drinking water.

Swimming lessons were laid on for the local schools, and many can remember them with dread!!!

The William Gregg Memorial Baths on Hands Road, which replaced Langley Baths, were opened in 1970. 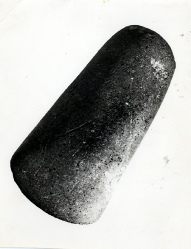 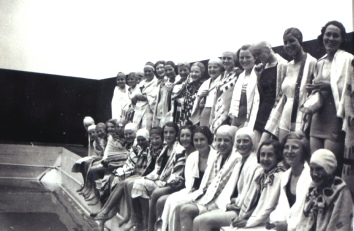 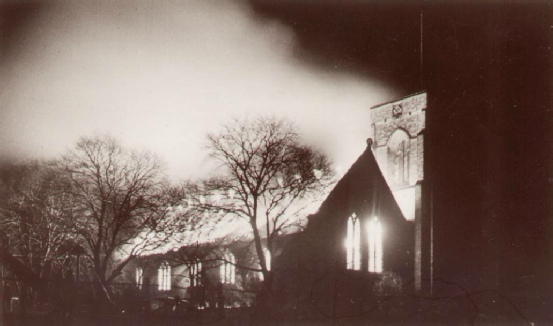 The old All Saints Church on Ilkeston Road, Marlpool, burned down on Christmas Eve 1949.

The new church was built by F. Sisson and Sons of Langley Mill, the firm which also built St Luke’s church at Loscoe.

Langley was the birthplace of Henry Garnet, a member of the Gunpowder Plot of 1605 - as such, he paid the price along with Guy Fawkes and the rest!

For more information, there is now a page dedicated just to him - click here! 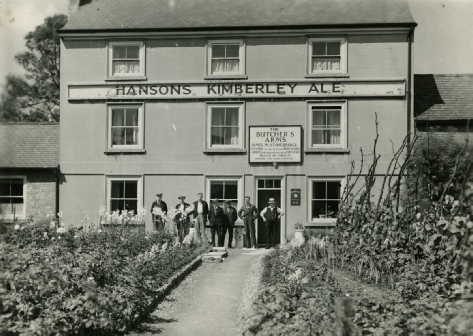 The early nineteenth century Butcher’s Arms, on Hands Road at Langley, is one of the few listed buildings in the Heanor area.

This photograph dates from 1941, when the front garden was used as an allotment as part of the ‘Dig for Victory’ campaign.