The building to the left was Heanor's first Police Station and Lock-up. The Police Station later moved to Wilmot Street, opposite the Grammar School, and then to Godfrey Street, just off the edge of Market Place.

The focal point of any market town is, understandably, its market. Think of Heanor, and you will think of the Market Place as being the centre of the town, the traditional hub of commercial activity.

However, Heanor never had a charter for a market, and, until 1888 it never had a proper market place - the busiest part of town, where any travelling market stalls would have been set up, was at Tag Hill (near the Jolly Colliers).

The Market Place which we know today was part of Heanor Hall Park; in fact, as late as 1828 there had been a pit, the Heanor Hall Colliery, on the Market Place site – right in what we see as the town centre! But in the late 1880s the Miller Mundys of Shipley Hall broke up the old Heanor Hall estate. (Heanor Hall, the home of the Ray family, stood where the old Grammar School – or South East Derbyshire College – now stands.) The new Market Place already had several distinctive buildings on its north side, with the church, the King of Prussia public house (hastily renamed the Market Hotel, at the start of the first World War), and the Town Hall, which was built in the 1860s. But the development of the new market caused the commercial centre of town to move from Tag Hill and Derby Road (then called West Hill), onto Market Street and Market Place, with increased shop building over the next few decades.

In 1897, there was a public subscription to fit a fountain in the Market Place, to celebrate Queen Victoria's Jubilee. This was an unusual item, as it had two troughs, one for horses and one for dogs, as well as drinking water for the public; the fountain remained until 1932/3, by which time the number of horses had diminished. 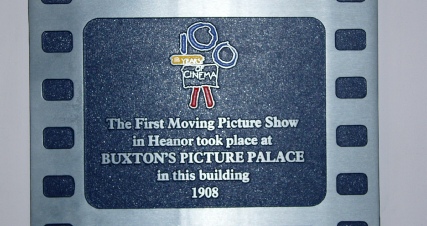 Elijah Burrows' saddlery was knocked down in 1922 to make way for the new Cosy Cinema, which later became a bingo hall in 1961 (and let's not forget that the Town Hall became Buxton's Picture Palace in 1910, one year before the Empire was built).

Next to the Cosy was Newbury's Grocers which lasted well into the 1970s. Other shops around the Market have included Hunt's Fish Shop, the Post Office (before it moved to the premises which are now the Police Station), Jackson's Butchers, Luker's Chip Shop, Greaves' Furniture Shop, Hall's Electrical, Winfield's Drapery, Bark's Gents Outfitters, and many more.

Perhaps special mention should be made of Rowell's Drapers, possibly the longest surviving shop in the Heanor area. It started on the junction of Wilmot Street and Church Street in the 1910s, then moved across the road, between the church and the Market Hotel, in the 1920s - it stayed here until closure in 2007.

Crowds awaiting the arrival of King George V and Queen Mary, 25 June 1914. Rowell's Drapery is to the right of the picture, the entrance to the church is at the top left.

Today's market is now a shadow of its former self; shopping trends have changed with more mobility favouring large out-of-town stores. The town centre shops have suffered the same effect.

But next time you walk across the Market Place, think about the history it has seen – the annual wakes (again, today's fair is little in comparison), Royal Visits, the arrival of the trams in 1913, the army recruitment campaigns of 1914-18. But most of all, view it for what it really was – the heart of a thriving community of traders and shopkeepers, providing a quality service for local people.

The market place from the top of the church tower, 1949.

A plaque in Heanor Town Hall commemorates the fact that this was the town’s first cinema - Buxton’s Picture Palace - in 1908.