Aldercar is an old area of what is now a joint administrative parish with Langley Mill.

The grandest building in Aldercar (and Langley Mill too, for that matter) was Aldercar Hall. Originally built in 1668, by the mid 1800s the Hall was occupied by the Wright family, partners in the booming Butterley Company, which had bought the land in the early 19th century as part of their expansion into the Heanor area.

The 1881 census gives some idea of the grand nature of the Hall. Amongst the 17 occupants at that time, as well as the master of the house, Francis Beresford Wright, described as "Iron and Coal, Proprietor of the Butterley Company, JP for the County of Derby, MA Cambridge, Farmer of 295 acres," there were also 9 servants: a lady's maid, a housekeeper, a laundry maid, two housemaids, a kitchen maid, a nursery maid, a groom and a footman. 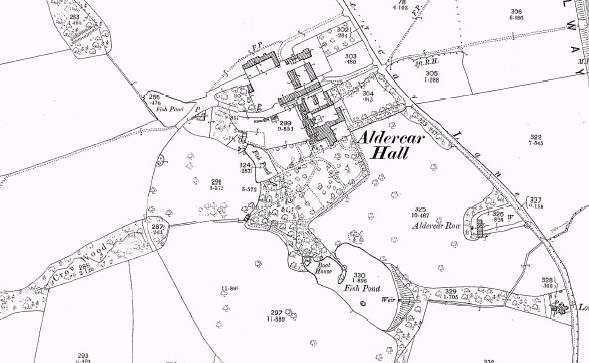 The 1900 Ordnance Survey map gives some idea of the splendour of the hall, with its fishponds, boat house and gardens.

In 1882, Francis Beresford Wright purchased Wootton Court in Warwickshire, and commenced a major expansion there, making it the family home. On 14 July 1883, an advertisement in The Times gave details of the forthcoming sale by auction of Aldercar Hall. The auctioneers were Messrs. E. and H. Lumley of St James' Street, London.

"The Aldercar-Hall Estate, Derbyshire, on the Midland and Great Northern Railways, within a drive of the beautiful scenery of Matlock, 12 miles from the county town, a like distance from Nottingham, and three hours' journey from London. A charming Residential Freehold Estate of about 300 acres, formerly one of the Parks of the Ancient Castle of the Peverils. The mansion, placed on a commanding eminence, approached from the high road through an avenue of chestnut trees, stands in the midst of a beautifully timbered demesne of fine undulating lands, the pleasure grounds on the south side being skirted by an ornamental lake with islands and a wilderness. It is entered from the avenue through a handsome old gateway, into a quadrangular court, and contains a spacious entrance hall with broad staircase, handsome drawing room with large bay window, dining room, library, billiard room opening into a pretty conservatory, eight principal bed rooms and two dressing rooms, bath room, school room, day and night nurseries, and seven secondary bed rooms, housemaid's closet, two men's rooms, &c. The domestic offices are excellent and fitted with every modern convenience; a dairy, with marble fountain; soft water cisterns, with force pump, and spring water, conveyed by gravitation from a spring on the hill, supply the hall and premises, and hot water and gas are laid on throughout. The stabling comprises six loose boxes, two stalls, two coach-houses, saddle and harness rooms, with chambers over. A terraced-garden court, laid out in the Italian style, with coloured gravels and fountain, with terraced rosery below, and on a lower terrace, enclosed by handsome box and yew hedges, is the tennis court, with beautiful walks down to the ornamental water and wilderness. There is an asphalte tennis court, also pretty rookeries, caverns and arbours. The lake, about two acres in extent, with islands connected by a rustic bridge, is a delightful object from the house. There is an aviary, three orchard houses, palm-house, vineries, &c. The Home Farm, with superior buildings, yards, &c., with 40 acres of grass land, adjoins the Hall; and Park Farm, of about 175 acres of grass and 60 of arable, in a high state of cultivation, with superior residence, a range of model farmbuildings, cottages, engine-house, &c., is most perfect and remunerative."

The auction took place on 26 July at the George Hotel, Nottingham, and the following day the Nottingham Evening Post gave an account of the auction, which also included the sale of Langar Hall.

"There was a very large attendance, but the bidding was characterised by a want of spirit not often witnessed at sales of such importance.

"Aldercar Hall, in the county of Derbyshire, is described as a charming seat, with lawns, pleasure grounds, terraced gardens, old park lands, lakes, &c., and connected with it are a model farm, bailiff's house, gardeners' and labourers' cottages, and nearly 300 acres of rich park pastures, meadows, arable and wood lands, well timbered.

"The auction commenced soon after one o'clock, Mr Henry Lumley being the auctioneer. Elaborate catalogues containing a full description of the properties with plans and photographic views were handed to those present. The auctioneer said that according to the advertisements and the particulars of the sale, it would be seen that he first proposed to offer the Aldercar Hall estate, and next he would offer the Langar property in 41 lots.

Aldercar Hall was built a few years ago by the present owner, and the farm buildings were of a most excellent kind, the total acreage being 39a. 3r. 8p. Two thirds of the purchase money could remain on the property at 4 per cent. The auctioneer described Aldercar Hall as a most complete country residence, and said that the owner had laid out thousands of pounds upon it. The whole comprised a freehold residential estate of about 40 acres. Lot 2 was an estate of 242a. 3r. 27p, and included an excellent farmhouse. If there were any biddings for the property in one lot, he would receive them; otherwise, he would sell the property in two lots. There were no bids made for the property in one lot, and the auctioneer then adopted the alternative. For Aldercar Hall, the first bid was £5,000, and the price offered increased to £6,000, £7,000, £8,000, £8,500, and £9,000, when no further advance was made. The auctioneer said that the reserved price had not been reached, and his authority did not permit him to sell the property at the price, so on behalf of his client he would buy it for £10,000. For Lot 2, consisting of the farm, & c., there were no biddings."

The Evening Post article refers to the house being "built a few years ago." It is known that Wright made significant changes to the property, but whether this was a rebuild or just a major renovation is not known. 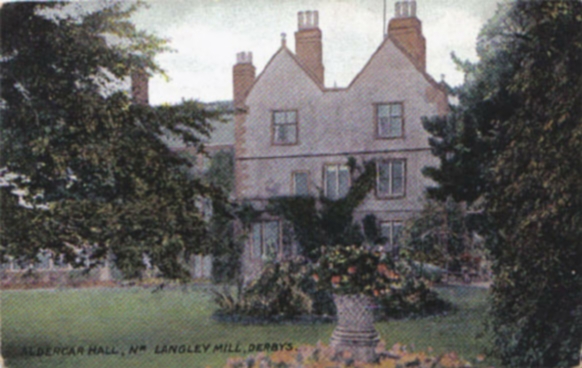 The precise nature of Mr Adams' academy, a sort of finishing school, is not clear, but the final advert in which Aldercar Hall is mentioned, in July 1891, gives a little more detail of the various courses offered:

"Boys of good character are received from the public schools and preparatories for any of the following:-

5. A general useful education, suited to juniors, the undecided, and the backward. All boys learn carpentry and bookkeeping, and have manual work daily, outdoors or in. Farmers have daily farm work of every kind on the farm and estate."

The same advertisement, however, announced that Mr Adams was leaving Aldercar, having "outgrown its resources," and was "removing in September to Wellingore Hall, near Grantham."

The next contemporary reference to Aldercar Hall is the 1901 Census. (Unfortunately, the 1891 census, which would have given details of the staff and pupils at Mr Adams' school, is damaged to such an extent that there are no details at all of the residents.) By 1901, the occupant was none other than Arthur Fitzherbert Wright, son of Francis Beresford Wright. Aged 35, this means that he will have been 17 when the Hall was put up for sale in 1883. The reversion of ownership to the Wright family suggests, in view of the above, that they never actually lost possession of the Hall, and that after the abortive sale of 1883 they leased or rented the Hall out to Mr Adams' academy.

Arthur Fitzherbert Wright remained a pillar of local society for many more years. In 1911 Francis Beresford Wright died, and his wife Adeline died in 1924. Wootton Court was left to their son Arthur, and, at the end of 1927, the Wright family finally left Aldercar Hall and moved to Warwickshire; Arthur stayed at Wootton Court until his death in 1952.

What happened next to Aldercar Hall, is, sadly, another story.