The earliest organised Baptist preaching at Heanor commenced in 1822, when fortnightly meetings, led by Brother Purcell from the Smalley Baptist Church, were held at Tag Hill. Over the following few years, various houses were used for this purpose. By 1827, Smalley Baptists were renting a meeting room at Mr Soar's, and, in the same year, Robert Wilkinson was appointed Deacon at Smalley specifically "to assist the friends on the Heanor side". A Sunday School was established in 1829, but the following year, amid financial problems and poor attendance, rental on the meeting room was terminated, and this early branch of the Church was given up. Occasional preaching continued in houses, but there is little reference to Tag Hill in the Smalley Church minute books for a number of years, but in the meantime the evangelical nature of the church led the Smalley Church to set up successful branches at Langley Mill and Kilburn.

In 1846, Thomas Godkin was appointed to have oversight of the "friends at Tag Hill", and in May 1847 the Church bought a plot of land at Barn Close, adjacent to the main turnpike road from Derby to Mansfield, from John Frost. A small church was erected on the premises, and two years later a Sunday School commenced. The original chapel had a small burial ground surrounding it, but later changes have removed all signs of this. The Heanor Baptist Church takes 1847 as the year of its foundation, though it was, at this time, still a "preaching station" of the Smalley Church. In 1851, the status of Tag Hill was elevated to that of a Branch Church, still under Smalley. 1854 saw some controversy, as, due to a shortage of church funds the church and land was almost sold off by two of the trustees (Thomas Cresswell and Robert Fletcher) to the Congregational Chapel, but this was prevented by the congregation, and the church survived.

The next major development was in November 1860, when a deputation from Tag Hill petitioned Smalley Church for permission to "go to themselves", i.e. to become independent of the mother church. The deputation consisted of Thomas Woolley, Enoch Gillott, James Arnold, T. Lockton, Edward Carrington, W. Smith, and Searson Newton. After some discussion, the petition was allowed, and the Tag Hill congregation was given the deeds to their church, and was admitted into the North Derbyshire Baptist Conference in May 1861. It was during the 1860s that the name Tag Hill Baptist Church appears to have evolved into Heanor Baptist Church. 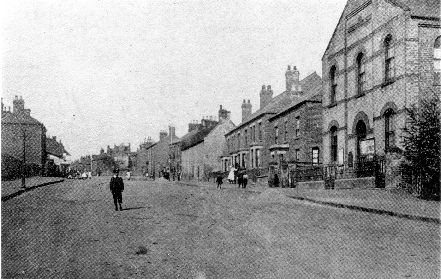 The early years were, at times, a little shaky, but by 1875 the church was firmly established, so much so that they began to plan, and raise funds for, a new chapel, with seating for 500 people, on the same site at West Hill (the former name for Derby Road).

A loan from the Derby Building Society, along with locally-raised cash, enabled work to commence in 1876, and this went on until the following year, during which time services were held in an old stockinger's shop at John's Place (behind the Jolly Colliers).

Over the last decades of the 19th century, the church often shared a minister in association with another local Baptist group. In 1882, for a few years Heanor was again associated with Smalley, under the joint ministry of Rev E. Hilton, and in 1895 the Rev G.D. Jeffcoat, minister of the Queen Street Church in Ilkeston, was also appointed Pastor at Heanor. In the intervening periods, Heanor relied heavily on various local preachers who would often walk from Nottingham or Derby to conduct services. But in 1900, what can possibly be regarded as the heyday of Heanor Baptist Church commenced with the appointment of Rev J.T. Owers as its Pastor. At the start of his ministry, he baptised twenty people on the same day, in the baptismal pool, in front of the pulpit, which is still used today. 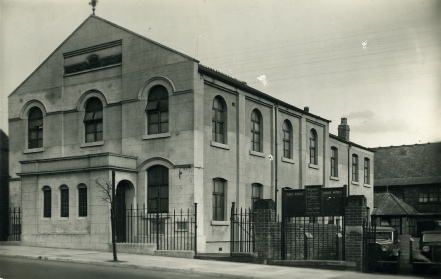 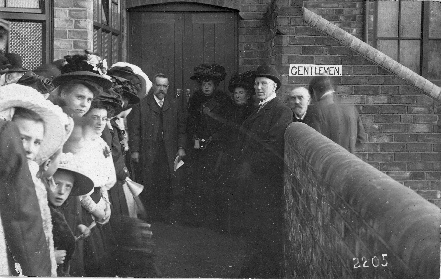 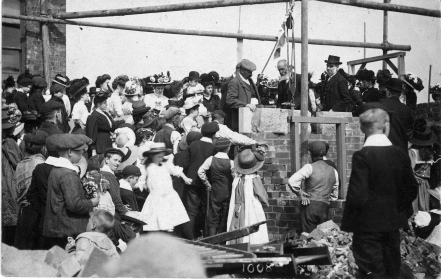 In 1900, the Church still owed £300 of the £700 mortgage taken out to build the new chapel, but this amount was cleared within a few years.

This allowed the Church to take on more building work, and in 1909 a large Sunday School Hall was added to the rear of the building, and a porch was added to the front of the Church. The total cost of these additions reached over £2000, but the whole amount was paid back within eight years. Rev Owers died in 1917, and a collection raised £450 for the supply and installation of an organ in his memory.

For a number of years, the church again relied on visiting preachers, but in 1929 the pastorate was offered to Rev Albert C. Hardy. At the same time, the church built a manse for the young pastor and his wife to live in. Mr Hardy stayed at Heanor until 1934, when he was succeeded by Rev R.W. Thompson. During his time, the church took on the house next to the church as the manse, and renovated it. Mr Thompson was replaced, in 1940, by Rev K.M. Chapman, and it was he, as part of the church's centenary celebrations, who wrote a history of the church, on which this webpage is partly based.

Changes to the building continued in the second half of the 20th century. The 1909 porch was replaced in 1967 by a new larger structure, along with a redesign of the front of the church above the porch. And major works in 1993 saw the removal of the 1918 organ, and the boxing-in of the first floor balcony. But the basic structure of the 1876 building is unchanged. 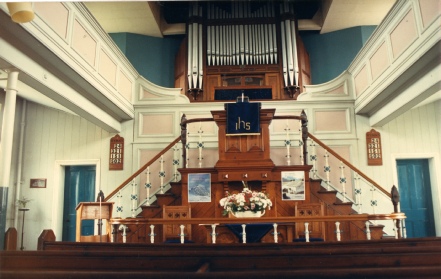 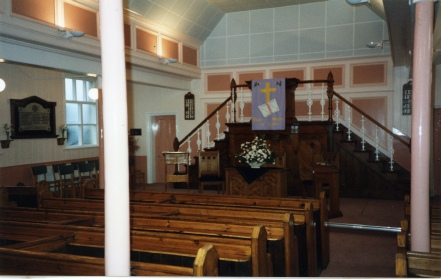 Interior views of the church before and after the alterations of 1993, which removed the organ and hid the first floor balcony.

The church today continues to flourish as part of the wider Baptist movement. The Sunday School Rooms have, since 2000, been the location of Heanor Pre-School, a very popular play-group, and are also used as a meeting place for other groups.

And, the church offers one small throw-back to times past, which is quite unique. Couples marrying at Heanor Baptist Church today still receive a marriage certificate stating that they were married at West Hill, Heanor, even though, in secular terms, the name disappeared over 100 years ago. 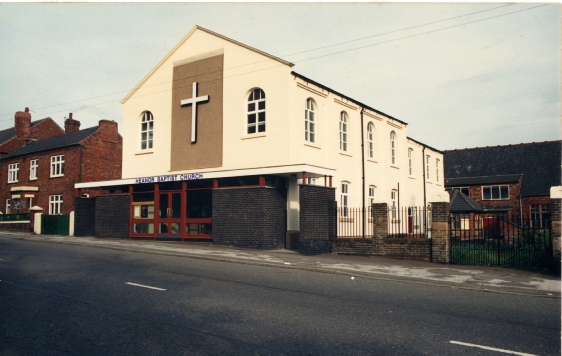 The modern church, with the 1993 porch and other external alterations.

We are grateful to the Pastor and members of the Heanor Baptist Church for their kind assistance in the preparation of this page, and for the use of the 1947 History of the Church.