To most local people, the history of  Langley Mill conjures up a picture of industrial activity, and little else - it has been claimed that it was the most industrialised village in the country.

That is now in the past, and the village retains little in the way of its former industrial heritage, in common with the loss of heavy industry across the country. The names G.R.Turner, Pickersgill & Frost, Lovatt's, Aristoc and Vic Hallam remain only in people's memory, but to many they help paint a picture of a bygone industrial age when the village provided employment to thousands of people in the area.

However, its history did not begin with the industrial revolution, which brought turnpike roads and canals to its valley location. Since medieval times and before, Langley Mill had been a principle crossing point on the River Erewash, with links to Derby, Heanor, Eastwood, Mansfield and Nottingham. A road to Codnor Castle had used the old wooden bridge since the 12th century, though there were very few houses in the area, and the majority of these were farmsteads.

Although there had been a water mill in the area since Domesday times, it was the Canal Age which initiated the development of the industrial village which later became known as Langley Mill. 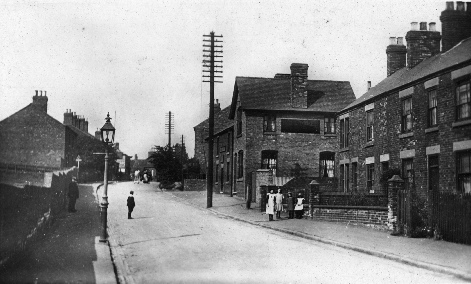 An early view of Cromford Road, showing the Durham Ox and, in the distance, the Aldercar Infants School.

Prior to the 19th century, the growth of the canals had given rise to an area of housing known as Langley Bridge. The Erewash Canal in 1779, the Cromford Canal in 1794, and the Nottingham Canal in 1796, all used the valley of the River Erewash, and together brought about the early prosperity of the area through the movement of coal, in order to satisfy the southern hunger of the industrial centres of Nottingham and Leicester.

Although housing and wharves were built to sustain the canal age around the area of Langley Bridge, where the three canals converged, it was the development of the Midland Railway, a little further west, in 1847, which promoted the development of Langley Mill through the resulting move of the centre of the village over the River Erewash into Derbyshire. Later, the Great Northern Railway also came to the village, but the shift to the Derbyshire side of the river was now unstoppable.

Large industrial concerns used the geography of the area to grow and develop along the fringes of the railway, with the resulting growth of many large industries including G.R.Turner, Pickersgill & Frost, Lovatt's and the Langley Mill Gaslight and Coke Company. The growth of housing obviously followed and the industrial village of repute was born.

Further industry followed in the 20th century, including Aristoc, the Midland General Omnibus Company, Vic Hallam, and F.Sisson & Sons. The associated social and commercial growth of the area helped to cement the industrial fabric.

The past 50 years has seen the pattern of life change for numerous reasons, with the resulting loss of many of the names associated with the village, and the growth of smaller industrial units of today.

The growth and development of Langley Mill over the past 200 years provide the student of history with a remarkable journey and an almost perfect example of the rise and fall of an industrial village linked so closely with its geography, economics, and aspirations of its inhabitants.

Langley Mill is always linked with what was the hamlet of Aldercar - it is hard to know where one starts and the other finishes. Today, the administrative parish is named "Aldercar and Langley Mill."

Separate pages on the site cover Langley Mill’s floods, and Aldercar Hall. Also see the pages on the canals and railways, as well as specific pages on individual companies which operated in the village. See ‘Forgotten Place Names’ for information on ‘The Puzzle’.

This item, from the Ripley and Heanor News in 1976, gives details about Langley Mill just before the main period of its expansion.

"We are indebted to Mr P. Eggleshaw for certain information about Langley Mill in 1840 when it was in two districts, one being Langley , and the other Langley Bridge.

The item on Langley Bridge is as follows:

'Langley Bridge is a considerable village with a bridge over the Erewash, principally situated in the parish of Eastwood, Notts. It is one mile east of Heanor. The present bridge was built in 1830 and William West is the tollkeeper here. The Erewash is navigable from here to the Trent and here is a junction with the Cromford, Derby and Nottingham canals.

'There are several large coal wharfs a steam corn mill and extensive lime kilns. George Whysall, of Heanor, the Butterley Co, Aldred and Co. and Gervaise Cressy Hall of Alfreton have wharfs here. Joseph Garton is a coal agent there. William Fletcher is a lime-burner. Mrs Elizabeth Bowes is Licencee of the Navigation Inn, and is also a corn miller and baker.

'Of the other portion of what is now Langley Mill, there is not much information excepting the following: The General Baptists have a chapel here built in 1839 with a Sunday school at a cost of £300 to seat 260 persons. The Rev. John Felkin, of Smalley, is the pastor.'

The Navigation Inn stood in what is now the entrance to Vic Hallam’s works [this is not actually correct] and Mrs Elizabeth Bowes had a reputation as a strict martinet, and quite capable of dealing with the numerous bargees and wharf workers who frequented the Inn.

The Baptist chapel mentioned is on what is now Station Road, but at that time, 1840, it was Heanor lane." 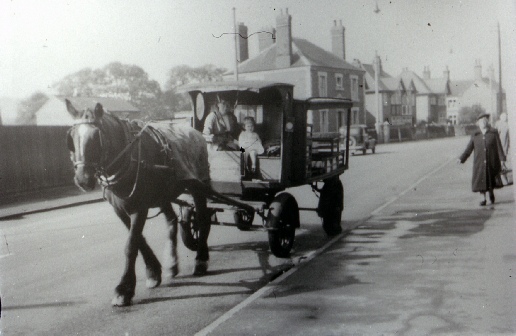