Once upon a time, the Heanor area was totally agricultural. But despite its rural history, without a doubt Heanor has been  an industrial town since the 19th century . This page lists just some of the industries (other than mining, which is dealt with separately) which were found in the area - nearly all now gone. 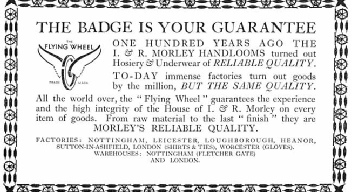 Morley’s factory  on High Street, Heanor, was one of the largest employers in Heanor, with over 1,000 workers at its height.

A throw-back to the old framework knitting days, before industrialisation, Morleys produced knitwear and underwear. Taken over by Courtaulds, and closed in the 1990s, the premises have now disappeared, and the site has been redeveloped by Tesco. 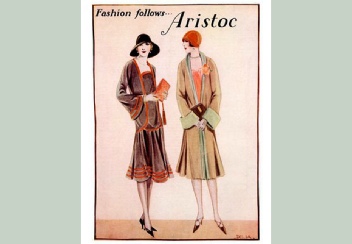 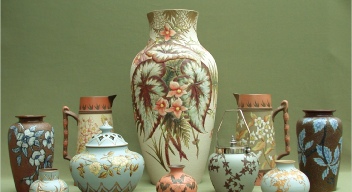 Langley Mill’s equivalent was Aristoc, a high-class stocking factory founded in the 1920s.

This site also closed down in the 1990s and has been redeveloped for housing.

James Calvert established a pottery on Station Road, Langley Mill in 1865. In 1883, it was taken over by the Lovatt brothers, and continued production for many years.

It became part of the Denby Pottery group in 1959, and finally closed down in 1982. Lovatt and Langleyware are still much in demand.

Staying in Langley Mill, the steel works of G.R. Turner was world-renown for its railway wagons and other products.

Again, after first becoming part of British Steel in 1967, the steel works were closed, and, after being the base of Heanor Haulage for a number of years the site was then developed for the current Asda supermarket. 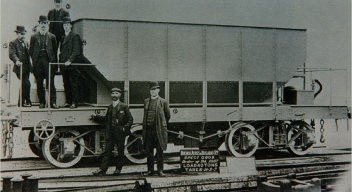 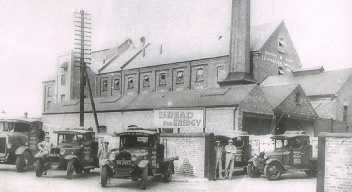 There was been a flour mill on what is now Cromford Road, Langley Mill, for  two hundred years, and  Smith’s was there since the mid-1800s.

But there was a mill in the area at the time of the Domesday Book in 1086 - doubtless the oldest industry around, and one which gave the village got its name. But even the flour mill has now gone, demolished in 2014.

Vic Hallam started his firm making chicken coops and sheds at Marlpool at the end of the first world war.

By the time the company reached its peak in the 1960s, they had a huge site (seen here) next to the Erewash Canal at Langley Mill, and were renowned for their prefabricated buildings, particularly schools. The company was also responsible for building the Derbyshire Miners’ Camp at Skegness. The site where the firm was based is now a business-park. Click for more. 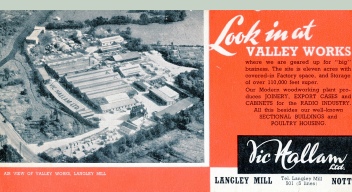 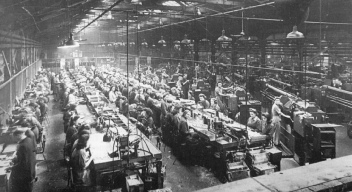 During World War II, the site which had just been acquired by Vic Hallam’s was taken over for the war effort by Collaro, a London company which was moved out of the capital to avoid the bombing.

An oral-history of the firm was published in the 1990s - "Boiler Suits, Bofors and Bullets" - giving details of the effect that this firm had on the local community - a fascinating read. After the war, Hallam’s finally took over its new site.

This is only a small glimpse of the industries which went to make up the Heanor area - many more could have been picked. As the website progresses, separate pages are planned for each of the major firms.

Time moves on, and the new industrial estates and business parks will, hopefully, keep employment in the area for many years to come.

Several of the industries mentioned on this page can be seen in aerial photographs on the Heanor from Above page.