The Nottinghamshire and Derbyshire Tramways Company was formed in 1903 by Act of Parliament. It was not until 1913 that the tramway from Ripley to Nottingham, via Langley Mill, Eastwood and Kimberley, was finally opened, the capital being funded by Balfour, Beatty & Co., of Ilkeston. The laying of the tramlines was a major project - many of the bridges which can been seen along the route date from this time (for example, the bridge over the canal at Langley Mill, which had previously been a wooden construction), and many old buildings were demolished for road-widening (e.g. the Crown and White Hart pubs at Heanor). Initially, the trams only ran as far as Cinderhill/Basford, where people had to switch to trams of the Nottingham Corporation, but later the city allowed Notts and Derbys trams to pass over its rails. The long route from Ripley was a single track, with 316 passing places along the route to allow trams to pass in the opposite direction. As other forms of transport developed, this limitation to the trams caused their demise. In 1916, the company also took over the Ilkeston Corporation Tramways, but the routes of the two companies never joined. 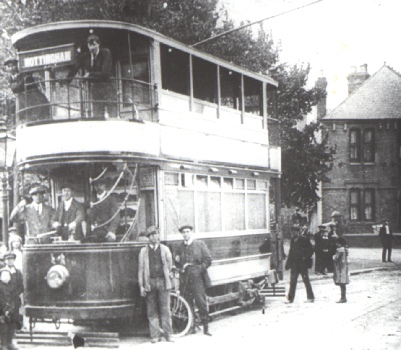 By 1928, Notts & Derbys was given power to operate a trolley bus system in the area. The first trolley buses were introduced in 1931, and on 5 October 1933 the last tram ran on the Nottingham to Ripley route.

The trolley bus system was very efficient and reliable, the journey from Ripley to Nottingham taking 90 minutes, with some 230 stops along the way.

Trolley buses continued until 25 April 1953, when they too gave way to the increased versatility of the bus. The fleet of trolley buses was sold to Bradford Corporation. 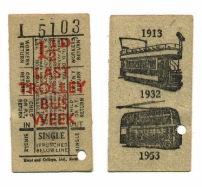 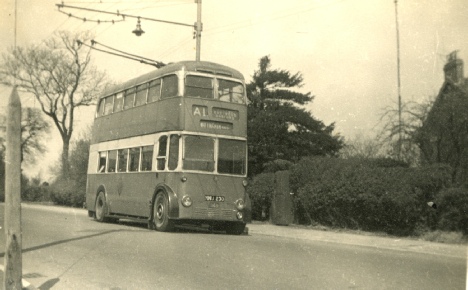 A1 trolleybus at Crosshill during the last week of commission,
April 1953. 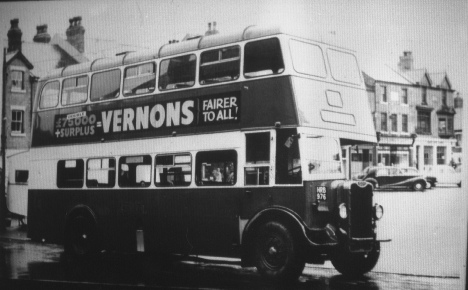 In 1948, ownership of the Midland General Group had been passed to the the British Transport Commission. In 1962 the Transport Holding Company took over, and, on 1 January 1969, the Midland General became part of the National Bus Company. The other large local bus company, Trent, also became part of the National Bus Company, and the decision was made to combine the two companies, using the Trent colours. The companies merged in 1972, and by 1978 the last MGO blue bus had been repainted. 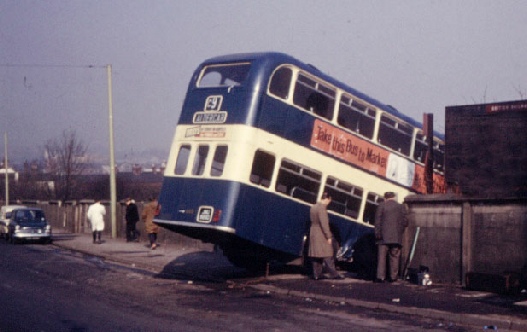 An unfortunate event for the C9 on its way to Aldercar.

This Midland General bus in full company colours came a cropper at the old Eastwood and Langley Mill Station, near to the Great Northern in 1969.

When we first posted this photograph on our website, it attracted a lot of attention focally and from around the world. Several emails were received naming the driver, but we weren’t going to post those details. Imagine, then, how delighted we were to receive a full account of the accident from the man himself, Glyn Pickworth, along with another picture! Here’s Glyn’s story…

"I was 15 years old when I left school and went to train and work for the Midland General Omnibus Company as a 'Fitter/Turner'. One of the company's minimum requirements to be able to drive any vehicle for the company, was to have, or train for, a PSV licence, and also to agree to fill in as a driver as, and when, required. I got my PSV licence at the age of 21.

In 1969, I was 26 years of age. I had been asked to drive the MGO. double decker bus on the C9 run - the last bus from Hucknall to Aldercar. Apart from myself and the bus conductress, Jean Clark (now deceased), there were two other passengers on board - a girl and Peter Meakin, a work colleague.

As I approached the Langley Mill Station corner, an Austin Healey 3000 sports car came zooming towards me, on the wrong side of the road as it overtook a Vauxhall Victor. It crashed into my bus, knocking the front off-side wheel back, and turning the bus into the station. Before hitting the station, the bus also collided with the Victor. The bus's steering wheel twisted like a figure of eight on impact. My right hand went through the windscreen as I was thrown forward and was bleeding profusely.

I wanted to check that my passengers were alright and I struggled to get out of my driving seat. The Austin Healey which was about 60/70 yards away burst into flames. Someone called the emergency services and an ambulance took me and others to hospital to be checked over. Amazingly there were no fatalities. I was back home from hospital by the time the police came knocking to get all the details. I was black and blue all over the next day and could hardly move. I was off work for about a month in all and, on my return, my first job was to repair that same bus with a new chassis.

My only reminder of it all - apart from memories - is a deformed right forefinger. However, now I find, quite by chance, that it's all on the website, bringing the possibility of 'world fame' ever nearer!!!!!!"

We also have a page which gives you a full list of the changes to the trolleybus and bus routes during the life of the MGO.