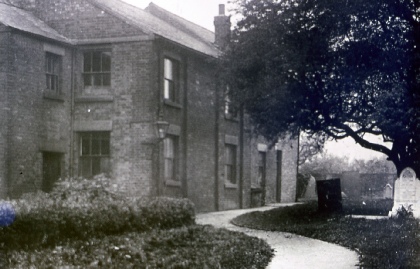 The oldest surviving place of worship in Langley Mill, the Baptist Church as we know it now, was established in 1839.

The General Baptist cause in the Heanor area first took root over 200 years ago at Smalley. In 1807 the Rev. William Pickering came from Ilkeston to preach at a friend’s house at Marlpool once a fortnight. At that time four of the members at the group belonged to the Baptist Church at Smalley. When the Rev. Pickering left Ilkeston preaching ceased at Marlpool; however it was revived from time to time as preachers from Smalley made several attempts to keep the movement alive. Interest waned in the Heanor area, leaving only nine people still true to the faith. In 1833, these nine people began to worship at a house in Heanor Lane (now known as Station Road, Langley Mill).

The fellowship began to grow and in a short while 24 souls were added to the membership by water baptism (presumably performed at Smalley). The Heanor Lane group of worshippers rose to 33, but was still known as a branch of Smalley Baptist Church. The decision was made to purchase a plot of land (some 500 square yards) from a Mr John Bakewell, in order to erect a chapel. Bakewell was the owner of a coal pit near to the chapel. and was later to become the first manager of Langley Mill gasworks. This was the first church building to be built in Langley Mill, and on the 1 April 1839 the foundations were dug. The foundation stone was laid on 7 May, and the chapel building was completed and opened on 27 October 1839 by the Reverend T. Pottinger of Swanwick and the Reverend Davis of Ilkeston. Bagshaw's Directory of 1850 refers to the Chapel being built at a cost of £300.

It was decided that the Langley Mill Baptists should now be allowed to run their own church, and in October 1839 twenty of the church members signed a note addressed to Smalley Baptist Church requesting "peacable dismission to conduct their own business". On 7 October 1839 the members met together and formed themselves into a Christian church. The first deacon was a Mr Stanhope. The cottage where the first meeting had been held was retained as part of the church premises, being used as an institute and later by the Good Templars who paid a sum of six shillings a quarter. 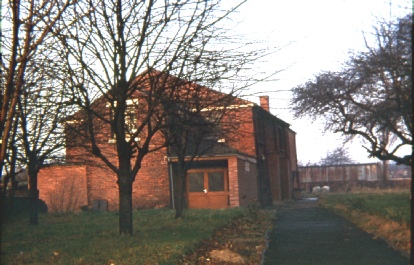 In 1854. a schoolroom for day students was added at a cost of £120, the Rev. John Felkin of Smalley being the pastor at that time. In the days before state education , schooling of children was a hit and miss affair being run by churches in the parish. Langley Mill Baptist church was one of the forerunners in the area as it is recorded that on 5 October 1869, "Miss Grainger is to undertake the running of the school, at a fee of one shilling and sixpence per week." You were required to pay 3d a week to go to school, but there were some weeks when parents simply couldn't afford for their children to attend.

In 1872 State Education began and on 4 June 1872 it is recorded in the church minutes "It has been decided to hold no more Day Schools in this place".

On the 26 January 1909 the deeds of both the church and cottage were put in the hands of the East Midland Baptist Association. Plans were made in the 1910s to build a new church, but the 1914 -18 War caused these to be shelved. In 1918 the original cottage was condemned and pulled down; a boundary wall was erected locating the site of the cottage on the left hand side of the church entrance, and the cottage garden occupied the space now grassed and planted with trees.

The external shell is of twelve inch brickwork with part timber part plaster internal finish. The original entrance was by a door at the side of the chapel front, this gave way to a small porch (see above two photographs). On the left front side of the porch a staircase led up to a small room (this being known as the "Box Class" for Sunday School use) and opened into a balcony inside the chapel. On the ground floor, swing doors led from the porch to the chapel which was fitted with bench type wooden seats. A dais housed a sunken baptistery (still in use) and a raised pulpit, above which (on the balcony) was a pipe organ. The sides and ceiling of the chapel were covered with match board. The 1854 schoolroom is to the rear of the chapel itself, and was match boarded half way up the upper part of the walls being plaster. 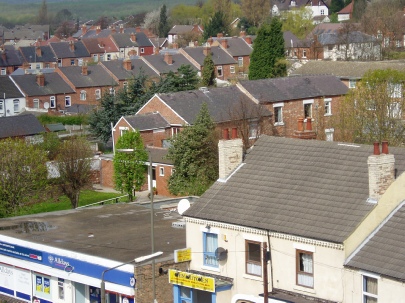 Added in 1868, a balcony ran round the inside of the chapel - some idea as to its size and area can be seen from the bracket covers still on the chapel walls; these were fitted to hide steel beams needed to support the balcony. The balcony was fitted with bench type seats of the same type as used on the ground floor.

Over the schoolroom to the rear of the chapel was a wall which housed the console of the pipe organ, and the choir stalls were placed at either side of this.

From 1839 to 1910, heating was either non-existent or by an open hearth. In 1910, it was decided to install heating provided by the Beeston Boiler Company, using their new idea of heating a large area by steam. A sunken boiler house was built at the side of the chapel, part of which can still be seen along with the chimney stack. Pipes led from the boiler house around the inside of the chapel

Lighting in the church was initially by candles. There is a record on the twelfth of November 1856 referring to "candlesticks to be purchased for the season and that Mr Wilson be asked to get them". In July 1868 gas lighting was installed. Brothers Wilson and Brown were asked to purchase gas fittings, there is also a minute in the church records for the sixth of January 1900 stating that "Bros R.Morton, W.T.Clarke and J.Morton arrange for the improvement of light in the chapel, with a light at the corner of the schoolroom outside to complete the work" In July 1948 a note was sent to the Notts and Derby Power Company asking them to connect the church to their power supply. Electric light was used for the first time in the chapel on Christmas Day 1949. It appears that electric heating was not in use until 1967 as there is a minute to the effect that "due to the high cost of electric heating for the last year we hold our evening services in the schoolroom during the winter months" made in July 1969. 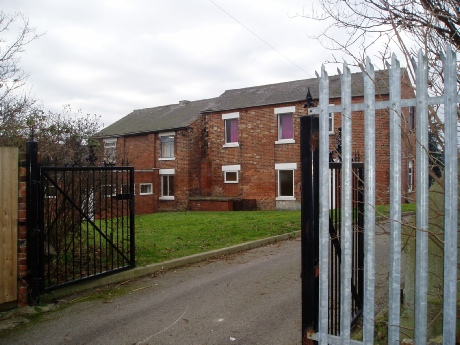 Structural alterations and improvements to the building have been carried out throughout the life of the chapel and schoolroom. The first alteration being in 1926 when an extension was built onto the rear of the chapel consisting of, on the ground floor, a vestry and staircase leading to a Ladies Parlour on the upper floor. Major alterations were made to the chapel in 1962, when the balcony was removed, the pipe organ disposed of and the ceiling lowered. The upper room formed had a boarded floor which is used as additional school room space and for social and recreational use. Part of the old schoolroom on the ground floor was incorporated in the church forming a recess on the same level as the baptistery dais. The stage was fronted with an oak rail and wrought iron balustrade.

The church entrance was also altered in 1962 to extend the width of the original chapel, with double doors facing the road , toilets and cloaks to the left and stone staircase to the first floor. Another major extension was made in 1982, comprising a large side meeting room and with a separate fitted kitchen.

The Memorial Scroll to the dead of the 1914-18 war was mounted on the wall inside the chapel during 1919.

A deacons' meeting and choir practice were brought to an abrupt halt on the thirty first of January 1916 by a Zeppelin raid, resulting in the lights going out when gas was cut off at the mains, plunging the whole of Langley Mill into darkness.

The safe used to house the Marriage Register was purchased from a Mr Upchurch of Eastwood in March 1917.

The electrical system in the baptistery was installed by Lee Electrical Services in 1960.

The floor of the church was originally timber, but due to dry rot was replaced by concrete, this work was carried out by church members in 1980. The floor in the ground floor Sunday School deteriorated in similar fashion and was replaced, in concrete, by a visiting pastor from New Zealand in September 1984.

The railings and wall at the front of the church were erected in 1951. The frontage was set back some ten feet to conform with the Urban Council's building line. The expense was met by the Notts. and Derby Tram Company who had previously taken a section of the road. 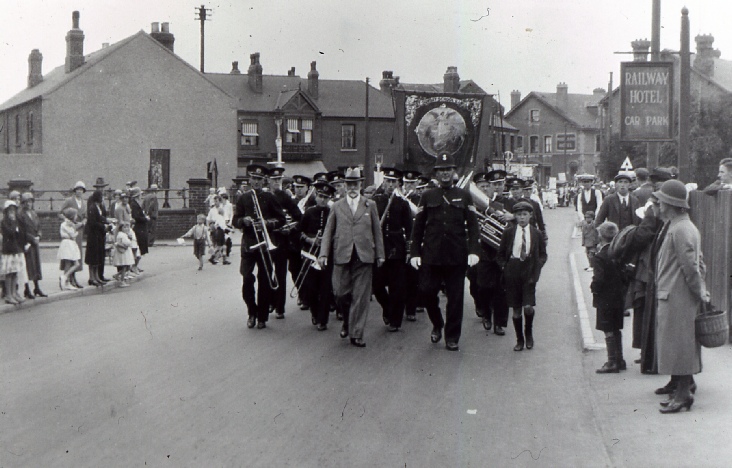 We are grateful to the Deacons of the Langley Mill Baptist Church for allowing us to publish the text of a history compiled in 1985 by Ken Smith and Alfred Wood. Also to Monty Wood for obtaining the item on behalf of the Society.