This photograph was taken between 1955, when the dye-house on the centre left was built, but before 1963 when the offices were added to the right of the dye-house. 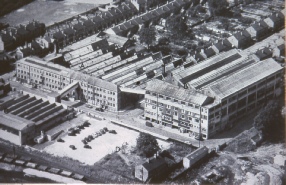 Immediately after the First World War, in 1919, Albert Ernest Allen, a Leicester hosiery manufacturer, set up the company of A. E. Allen & Co., with financial support was provided by two friends, Percy Aspinall and J H Williams, a paper merchant, who later became chairman and managing director.

Fine gauge stockings were relatively new and Albert Allen visited the USA to investigate the manufacturing process. He then commenced manufacturing in an old factory at North Street, Langley Mill, the area being a traditional hosiery manufacturing area with a reservoir of skilled labour. The firm concentrated on quality merchandise and was committed to the manufacture of fully fashioned stockings.

The brand name Aristoc came in 1924, based on its product being "a stocking of breed and character. Truly an Aristocrat in every sense of the word," according to their first advertisement, in Vogue in 1926. Continued growth saw the firm became a public company in 1934, adopting the name Aristoc Ltd.

As with so many companies during World War Two, the company had to change its output for the war effort, and produced items such as barrage balloons, inflatable dinghies (as in the pictures below), and the like. It was at this time too, that the production of silk stockings was stopped; these were replaced by rayon and cotton products,  new ventures for the company. 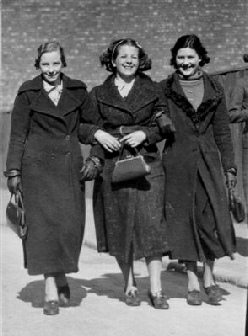 A late 1930s shot of Aristoc factory girls. In the middle is Josie Sumner, of Mill Road, Marlpool, flanked by Betty Baker on the left and (we think) Clara Nichols on the right. 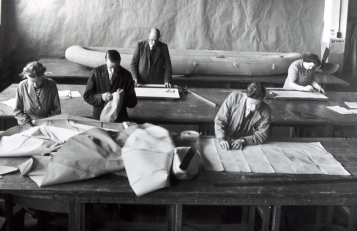 The original 1919 factory was extended several times, and in 1939 a new large building was added for manufacturing. In 1954, a dye house was added on the opposite side of the road, next to the railway lines, but connected to the main building by a bridge over North Street. A modern office block was added adjacent to the railway in 1963.

A shortage of labour was a common feature of the industry after the war and Aristoc suffered along with many other firms. A factory was set up at Maltby in Yorkshire, in partnership with D Byford and Co of Leicester. This remained a joint venture until 1952 when it was passed over to Byfords. It was around this time that nylon became the preferred yarn for stockings which then became generally described as 'nylons'. In 1955, Aristoc also set up a factory on the Isle of Man. Although the firm had built its reputation on the manufacture of fully-fashioned stockings, it was responsive to fashion changes and began the manufacture of seamless stockings. In 1961 it bought the Meridian knitting plant on the withdrawal of that firm from the stockings industry. 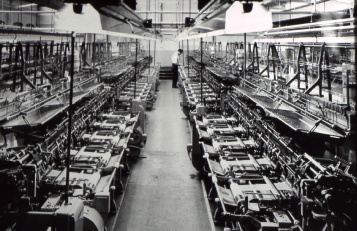 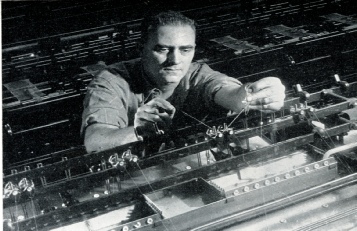 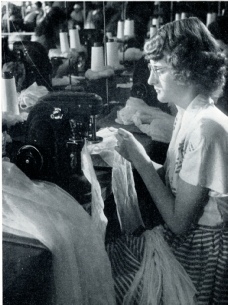 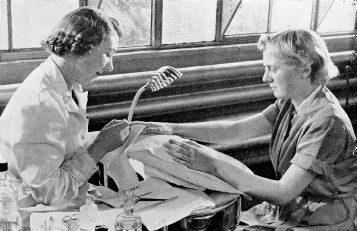 A collection of photographs from inside the factory, mainly from the 1950s.

In 1957 there were still three directors of the firm who were sons of the founders of the company. By 1966 responsibility had fallen on H E Williams, the elderly chairman, and the firm passed into the ownership of Courtaulds. Aristoc remained successful and was able to command the highest prices for its product. As a brand leader Aristoc was a useful acquisition for Courtaulds who needed customers for their own brand of nylon (Celon) and were able to use large quantities of that product. At the time of the takeover, Aristoc employed 1300 workers making hosiery.

Despite the loss of many famous brand names Aristoc survived to become Courtaulds' preferred brand name for stockings at the top end of the market, and this continued in 2000, under the new owners of the brand, Sarah Lee Corporation.

The factory site was demolished in 2002, and now forms a residential area 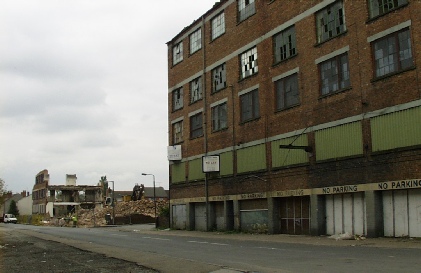 We are grateful to Anne Clarke for the “Factory Girls” photograph, and to Dorothy Hill for supplying names to the two girls with Josie Sumner in the photo.

The Society acknowledges the assistance of "Knitting Together," a project led by the Leicester City Museums Service, in the preparation of this web-page.