The Heanor and District Local History Society  was formed in 1968, and currently has a membership of around 140. The Society is registered as a charity in the United Kingdom (Registration number 1006799).

The objects of the Society are:

to promote interest and research in all aspects of the history of Heanor and District, by holding regular meetings, by publishing the useful results of research, and by acquiring and preserving items of historical interest to the area.

The Society's Committee deals with all aspects of the day to day running of the group.

Details of how to join the Society can be found on the Membership page.

The Society holds meetings every month from September to July. Normally, the meetings from September through till May are held at the Wilmot Street Community Centre, Heanor, on the 2nd Tuesday of the month, at 7.30pm. Everybody is welcome, whether members or not, to these informative presentations on a wide variety of local history topics, concerning not only the immediate area, but sometimes going a little further afield into Derbyshire and Nottinghamshire.

As well as ordinary members, the Society occasionally elects persons to the position of Honorary Life Members, in recognition of the work they have done to support us.

The last time this was done was at the Annual General Meeting in April 2005. Mr George Eyre, a founding member of the Society back in 1968, gave the first presentation to the newly formed group, with a talk on the history of Codnor Castle.

It is appropriate, then, that Mr Eyre was presented with a framed photograph of Codnor Castle. 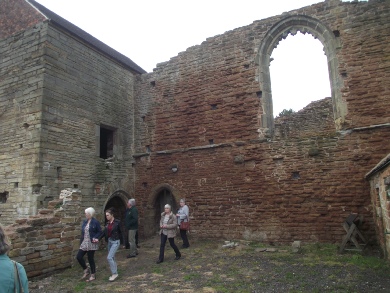 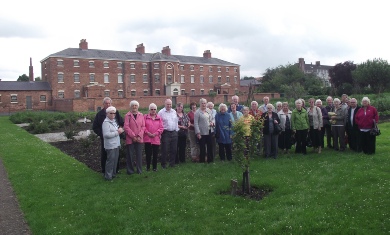 In 1991, the Society established the Heanor Heritage Centre, situated in the old chapel in Marlpool Cemetery. Sadly, 2005 saw the closure of the Centre, and we are actively seeking new premises. However, temporary displays of photographs and other items of interest are regularly held at various locations, and in 2009 we set up a permanent display in the Heanor Antiques Centre. See the Displays page for more information.

Over the years that the Society has been in existence, it has published numerous books and papers on the area. The Publications page gives full details of all our published work; most of those still available can be bought online from ourselves.

Additionally, the Society produces a newsletter, free to members, nine times a year. Details of recent newsletters are available on this site - previous newsletters (there's over 360 of them now!) and a comprehensive index are available at a very reasonable price - contact us for further details.

Our logo was designed by the Society in 1993, and was drawn by Alan Gill, who provided cover illustrations for the Society's first two publications.

The logo represents the principal industries of the Heanor area in the past, and includes pit head gear for coal mining, a framework knitting machine for the textile industry, and bottle kilns representing the pottery industry.

After 20 years of being copied, and with the original artwork no longer available, the logo was redrawn in 2014 by Dr Mandy de Belin; the themes were retained, but are now more clearly defined and have and less background.

In October 2012, the Society was awarded the prestigious Derbyshire County Council Excellence in the Community Award (see photo below). The then Chairman Robert Mee (centre), and Vice-Chairman Brian Key (right), attended the awards ceremony at the Devonshire Dome, Buxton, to collect the award, which was presented by the chairman of the County Council. 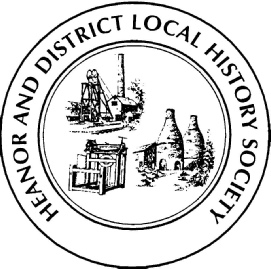 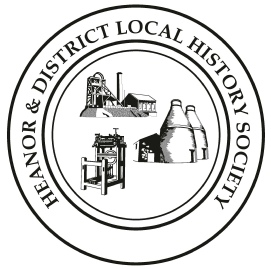 In September 2012, the BBC magazine, Who Do You Think You Are?, published a full page article on the Society, and its website - we're really pleased to have been chosen for this.

In 2005 the British Library included this website in a national archive of "selected key UK websites - ensuring that invaluable scholarly, cultural and scientific resources remain available for future generations." Out of the hundreds of thousands of UK websites out there, only a tiny proportion are concerned with local history, and only ten were chosen for this exercise - we were rather honoured at being asked!

But of course, most of the time our work goes pretty much unnoticed! 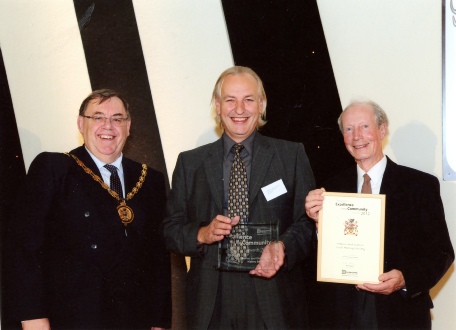