The Heanor and District Local History Society has been publishing books on the area since 1977.

Our earlier publications are pictured on the right, though not all are still available - you can normally find them on second-hand book sites though.

This page lists all the publications the Society has issued. Where a book is still available, there is a link to a separate page where you can obtain further details and order direct from us (usually at a lower price than buying from a dealer!)

If you would prefer to pay by cheque, then please use the Contact page, and we will forward details of where to send your payment. 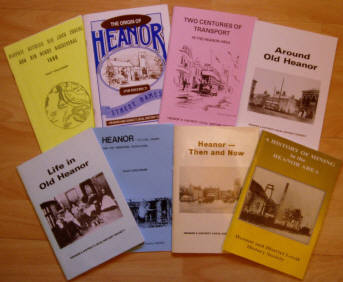 Although none have been published for many years, there were two early papers, not large enough for a full publication, but too big to fit in a newsletter, and we haven’t ruled out doing this again.

(Neither publication is now available.) 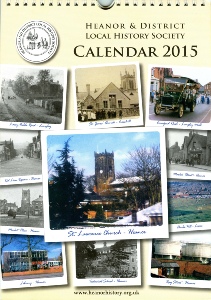 In 2000, the Society produced a video, "Heanor's Past in Pictures", in association with Past in Pictures Videos. The video was narrated by Simon Groome, and it was later also released in DVD format. It is currently unavailable, but we are trying to source a future supply.

For many years, the Society has been publishing an annual calendar, each month being illustrated with a photograph relating to the Heanor area. Priced only £3 plus postage, the calendars can also be purchased at Society Meetings, or from several local shops. Orders can be made using the Calendar page. And, to the right, a reminder of last year’s calendar.

And don't forget our most regular publication, the monthly newsletters which contain a wealth of local historical information.