As well as the location pages, you will also find pages according to theme.

Local personalities is another theme, and this section also has a topic on Henry Garnett, of Gunpowder Plot fame. A little more recently, a page tells the story of the suffragette movement in the area.

In view of the popularity of the theme of transport, this section is split further into pages on the local canals, railways (including a separate photo gallery on the now disappeared Eastwood and Langley Mill Station), and public transport (which has a separate page on the route numbers used by the MGO over the years).

We have a page on that rapidly-disappearing establishment - the public house. And a little more unusual is the page on local ghost stories - more tales are welcome! 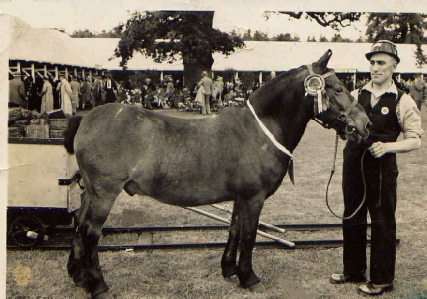 Tom France, of Shipley Coppice Pit, with his award-winning pony Jerry at the Royal Windsor Show, 1937.

We thank Jeff France for the photo of his father and the pit pony.