With such a strong mining heritage, it is inevitable, if unfortunate, that there will be an equally strong history of accidents and disasters.

This page (which will be developed further) hopes to serve in some small way as a tribute to the miners of the past, in recognition of the arduous and dangerous task which they had in order to provide the country with the power needed to drive our industry. It contains just a few stories of the accidents which litter the history of mining in the area.

In November 1922, two men were buried by a roof fall at the Coppice Pit, Shipley. Two pit deputies, Stephen Richards and James Beresford, at once started working to get at the men, at great risk to themselves as the roof was "bitting" and falling the whole time. Richards got timber and made a cover for the men while the pair worked to release them. The fall had got one man pinned against a tram, with a big lump holding down his foot, and his arm buried inside the tram - to get him free, Richards had to lie down and "hole" the dirt away. Beresford was working to free the other man, while the roof was still breaking away. It took over 3 hours for the two brave deputies to release the trapped men, who would have undoubtedly died had it not been for their rescuers; actions.

In July 1923, Richards and Beresford attended Buckingham Palace to receive the Edward Medal (a medal for civilian gallantry in the mines, now superseded by the George Cross). There was also an event at the Boat Inn, Shipley, where they were presented with a gold watch and chain, £10 from the Company, £5 from Major Mundy, and a Carnegie Trust Award. 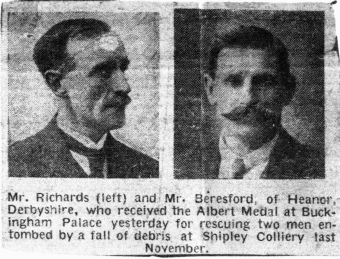 (Excerpts from the diary of Joseph Hutsby, who was an official at the Old Loscoe Pit from 1841 to 1846)

"Laystill at both pits in consequence of a boy falling in the soft coal pit, namely Samuel Weston aged 14 years from Taghill. Mist his foot hould in trying to get a chain to go down in the morning. The inquest was held at William Row's at the Nag's Head in Taghill today. Brought in accidental. Self on jury for the first time. Mr Wetstone the Crowner of Derby"

"Self and John (son) went to Samuel Weston funeral"

"Turning at both pits. Charles Allen caught hould of the end of the chain coming out of the bottom of the soft cold pit and held while he could, who told William Leivers who was at the bottom he could hould no longer, and then dropt and killed himself, being about 10 years and 10 months old. Mr Whiston the Coroner being passing this way today, in inquist was held at the Golden Ball, Loscoe. Self on the Jury."

"Turned all day at hard, ½ day at soft. Self at Collry. John went to Charles Allen furnal to night."

There were no heroes who could have saved young Samuel or Charles, given the primitive method of descending and rising from the pit - just a rope or chain to hang onto!

On Monday 28 June, 1943, four men were fatally injured by an explosion at the Coppice Colliery, Shipley. It was around 10 in the morning, while shotfiring operations were taking place. Immediately prior to a controlled explosion being carried out, there had been "a loud bump," which was probably part of the roof giving way. It is thought that this caused a leak of methane gas, which ignited when the shot was fired.

Wilfred Noon, Archibald Bestwick, John Holmes, and James Draper, all of Heanor, were badly burned, and later died of their injuries. Two other men were also badly injured.

Being in the middle of the war, the incident received less publicity than would normally have been the case. No public enquiry was held, as would have been the case today, though the Coroner did say that he hoped that the technical evidence in the case would be of assistance in preventing future such accidents.

In 1900, a miner at Bailey Brook pit had forgotten to change his hat, and went down the mine still wearing the bowler hat which he wore to and from work. He was sent back to the surface to fetch his pit hat. On the way back down the shaft, the cage stopped at the water lodge, about 45 yards above the pit bottom - the man didn't realise this, opened the safety bar, and fell to his death.

Details of a pit death circa 1848: "Joseph Bircumshaw was asphixiated after the ignition of firedamp and consequent explosion whilst driving a head between the hard and soft coal seams at Loscoe. He had attempted to get out of the pit and was overcome by the fumes and found to be dead on arrival at the surface."