Shipley Country Park was opened in 1976, covering the area around the old Shipley Hall, demolished more than 30 years previously, together with the newly restored opencast sites around the Woodside and Coppice Collieries. Today it is a flourishing country park, with cycle hire, walks and a Visitors Centre.

An early plan in the development of Shipley Country Park was to set aside an area, comprising some 390 acres around a 32 acre lake, for leisure activities. In 1979, discussions began between Derbyshire County Council, the owners of the site, and a firm called KLF, led by Peter Kellard, who proposed what would now be called a Theme Park. Despite many objections, and a change in County Council leadership, which entailed a prolonged court battle between KLF and the Council, the proposals eventually developed into Britannia Park, with the site being taken on a 100 year lease. 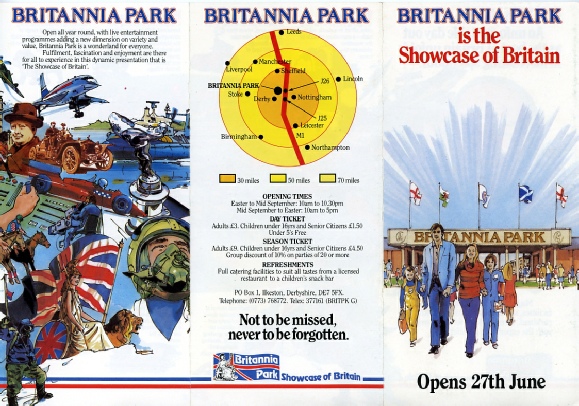 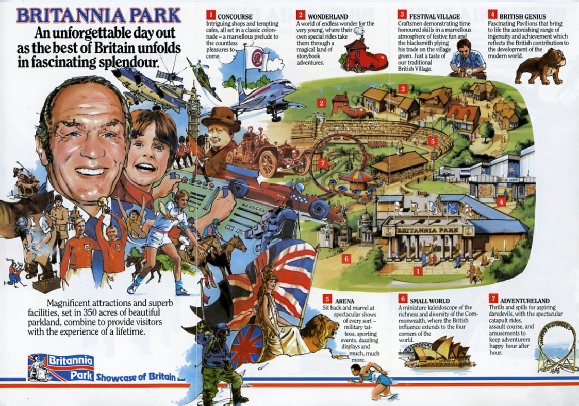 The total debts of Britannia Park were just under £9.5 million. Many of the creditors never received the cash they were owed: Henry Cooper was still waiting for his £10,000 fee for performing the official opening; the Lord Lieutenant of Derbyshire, Colonel Peter Hilton, was owed £28,000 and had to sell his garden nursery business; Bass Brewery was owed £130,000.

The park was bought by the County Council for £2.5 million in 1986, and sold to Grenada, who reopened the park, under the name "The American Adventure" in June 1987. Grenada in turn sold it to Ventureworld in early 1997. The American Adventure itself announced its closure after the 2006 season, and the land is still awaiting a decision as to its future.

Do you have any photographs of Britannia Park taken during the short period of its existence? If so, we would be really pleased to hear from you - please use the Contact Us page to get in touch. 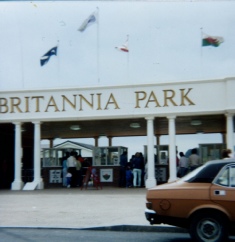 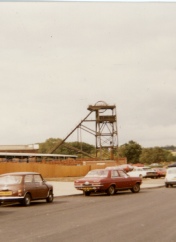 The above request has brought these photographs from Stan Durban of Croydon, for which many thanks. On the left is the entrance to Britannia Park, while the right-hand picture shows the old headstocks of Woodside Colliery, seen from the car park of the Park.

The leaflet, pictured on this page, promoting the opening of the park lists the attractions which were to be offered:

Concourse: Intriguing shops and tempting cafes, all set in a classic colonnade - a marvellous prelude to the countless pleasures to come.

Wonderland: A world of endless wonder for the very young, where their own special rides take them through a magical land of storybook adventures.

Festival Village: Craftsmen demonstrating time honoured skills in a marvellous atmosphere of festive fun and the blacksmith plying his trade on the village green. Just a taste of our traditional British Village. (See the Britannia Park Craftsmen page for an inside view.)

British Genius: Fascinating Pavilions that bring to life the astonishing range of ingenuity and achievement which reflects the British contribution to the development of the modern world.

Arena: Sit back and marvel at spectacular shows of every sort - military tattoos, sporting events, dazzling displays and much, much more

Small World: A miniature kaleidoscope of the richness and diversity of the Commonwealth, where the British influence extends to the four corners of the world.

Adventureland: Thrills and spills for aspiring daredevils, with the spectacular catapult rides, assault course, and amusements to keep adventurers happy hour after hour.

Well, that was the theory anyway!

The park was opened on 27 June 1985, by Henry Cooper (despite earlier suggestions that there would be a royal opening!) For just £299 you could have a return flight on Concorde from Heathrow to the official opening! Weather-wise it was a wash out, and as the season progressed it got no better! But, perhaps the biggest problem was that very little was actually ready, and parts of the park still resembled a building site. An early visitor was quoted as saying that you could do everything worth doing in less than an hour!

On 9 September, just ten weeks after it opened, the park was bankrupt, and receivers were called in.  "The Showcase of Britain" was kept open for the rest of the season, but then closed its doors, and was up for sale.